Aller au contenu principal
Workshop organized by Jean-Baptiste Delzant, AMU-LA3M & Camille Rouxpetel Villa I Tatti/TEMOS-Université d’Angers | Jerusalem | 11-13 juin 2019
Workshop organized with the support of the Lila Wallace–Reader’s Digest Lecture Program–Villa I Tatti, Harvard University
The seminar would be about transcultural and interreligious dialogue between Italy and the Middle East during the Renaissance. It pursues the hypothesis that communities do not live in isolation but are in constant interaction with their immediate environment, namely other Christian communities, Judaism and Islam. Decompartmentalizing historiographies means moving the analysis of communities from their centers to areas of contact.
It has three main objectives:
• Give a vision both global and local by adopting a scale of global analysis, that of the connections between the Christian, Jewish and Islamic Mediterranean worlds, based on very local studies in three critical configurations: shared and competitive holy site; personal conversion; transcultural dialogue in both Christian (Frankish Kingdom of Jerusalem and Renaissance Italy) and Islamic (Mamluk and Ottoman Middle East) context;
• Study the inter-Christian, Christian-Jewish and Christian-Muslim relations at a pivotal moment, that of Renaissance Mediterranean. This involves reassessing the moment when a transcultural dialogue increases and the new relations that result between Jewish , Christian and Muslim communities and with sovereign powers;
• Reinforce a scholar’s network between France, Italy and Israel and develop Renaissance Studies in Jerusalem in regard to the circulations between both sides of the Mediterranean during the Mamluk and the Ottoman Period.
Télécharger le programme complet
11 juin 2019, 14h0019h00
Ajouter au calendrier
École biblique et archéologique française
83-85 Naplous St./Derekh Shekhem, Jerusalem 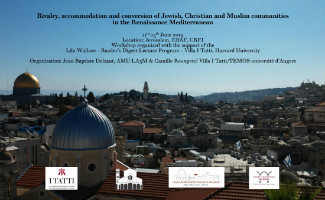